We took two days off near the end of August to see the yearly explosion of wild flowers in Namaqualand. With relatively good and early rainfalls in July and August the landscapes above and below would normally have have been spread with carpets of yellow, orange, pink and red wild flowers.

This year however the winter rains came late and too sparingly. The veld was dry, the air biting cold and not a single flower to be seen.

We love being on the road and would not let the no show of flowers dampen our spirits. The Karoo landscape with far away horizons has its own special allure, gently but persuasively pulling you away from the compactness of urban life into a radically different frame of world and time challenging one to soar like an eagle.

The barrenness of this world is part of its allure. The mountain ranges grasp their secret way of having been here from the beginning. You may look into the universe to glance into its depths and see a world as she was made unfolding in front of you.

The town of Loeriesfontein has no outwardly impressing features. A scattering of houses on fair sized plots. But behind there are stories to be told which we want to uncover next year on a more auspiciously flowering trip. Windmills used to be a feature of the Karoo landscape but are becoming increasingly rare and thereby nostalgic – remnants of the so-called good old times now past. Sheep farms are converted to game resorts or areas of fracking for gas without civic consent. The land without sheep or goats will recover significantly given ten, twenty years time, allowing for the re-introduction of game.

We took route R364 back through the Botterkloof and Pakhuis passes where we stopped to pay our respect to the memory of a junior British officer, Lieutenant Graham Vinicombe Winchester Clowes of the Gordon Highlanders who fell here in a skirmish on 31 January 1901, aged 20. 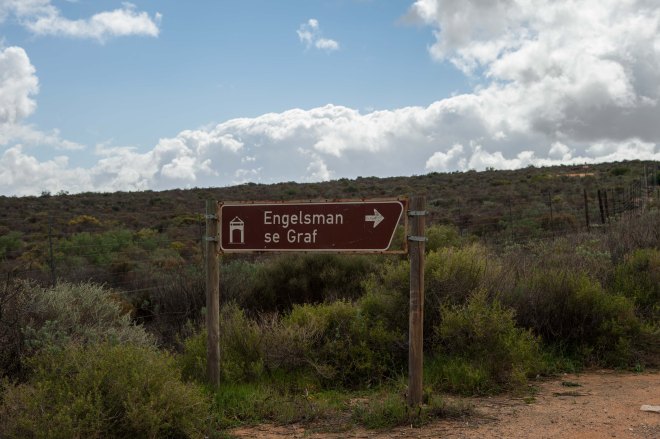 “Devastated by the death, his mother travelled from Hertfordshire to have the gravestone constructed and placed. For many years after Lt. Clowes’s death, his mother would make the five weeks’ journey by sea to the Cape to make the pilgrimage to her son’s grave on the anniversary of his death in the searing heat of the January sun.” (A. Cusack)

“I learned after I stopped at the grave that the soldier’s mother had journeyed all the way from England after the war to find this remote spot and have the memorial erected.  Mrs. Clowes would have embarked on a steamship, probably in Southampton, and journeyed over the sea for three weeks to reach Cape Town.  Then she would have taken a horse-drawn conveyance such as a Cape cart to the north, a journey of three days through barren spaces filled with peculiar sandstone formations in constantly changing patterns.” (Jenny’s blog Feb 27, 2009)

“Ancient strike-marks show that Bushmen and Khoi people used them for drumming. Dolerite boulders were also used as ‘canvases’. Some of the planet’s earliest human artistic expression is etched on dolerite, at sites all over the Karoo.” (www.karoospace.co.za)

In the end, flowers we did not find, but we had a wonderful two-day trip up north which we enjoyed a lot.