We are on the road again, travelling from Betty’s Bay to Johannesburg where we are scheduled to meet up with our friends from the Cevennes in France. They were born and grew up on various mission stations in Lesotho and that is where we will take them again. And we are as excited as they are.
On the National road number one – the N1 – from Cape Town to Johannesburg, there is always a lot of activity. Hundreds of trucks, okay and lots of road-works to keep this main arterial open and flowing. But added to it now new fibre optic cables are being laid along the highway to upgrade the country’s communication capacity. Soon all unsightly telephone poles will have disappeared while thousands of new jobs are being created.
How often do you give a thought to the workers on point-duty while you wait at a road works stop for the light to turn green?

His name is Keith. He grew up in De Doorns in the Hex River Valley. Working on one of the many export grapes producing farms in the valley he earned R 63 a day. Here, on the road outside Colesberg in the Karoo, 700 kms for his home town, living in the company’s compound, he earns R 158 a day. Not enough though to further his kid’s career beyond matric. Higher education, we agree, should be free to all who qualify.
We travel on through the Karoo which is unusually lush for this time of the year. Lots of rain this season – a sign again of climate change, no doubt.

We had made good time on our first day and could afford an excursion to a memorial to the women and children who died in the British concentration camps in Springfontein during the Anglo-Boer War. The site also commemorates the many young British soldiers who gave their lives for king and country. We lost our way at first and having passed an abandoned construction site for the building of new RDP-houses we enquired about directions to the memorial as well as what had happend to the building project. We were redirected and given the story of the construction business – the money, William, our road side informant told us, had “been eaten up” – in other words, an ANC appointed contractor started the project with outside labour, soon ran out of funds and since then has disappeared. Meanwhile the piles of bricks, some still intact, are beginning to find homes elsewhere in the community. “Right there, you see, there is a new house being built with RDP bricks.” 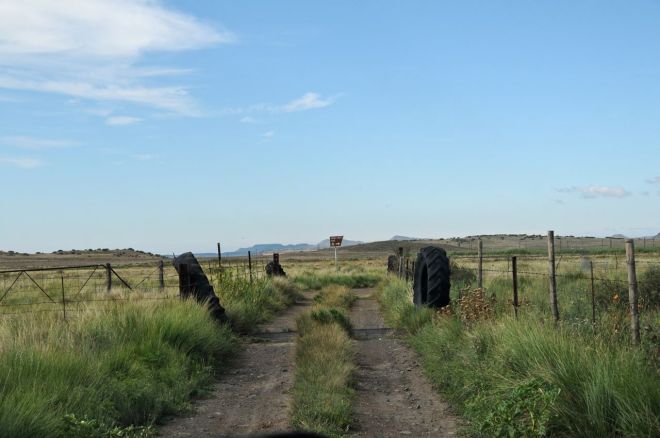 Pathway into the veld at Springfontein where the memorial site is located.

The site is kept very neat and was mown while we were visiting.

We liked the balance between the victims on both sides equally commemorated.
It is a memorial to remember that in a war no one wins.