Named, for family reasons, after St. Thekla – a 1st century Saint and convert to St. Paul himself – our Thekla has, we feel, many characteristics in common with her saintly namesake.

Passion, commitment, fascination, open-mindedness, intellectual engagement, charm and enduring humour are some of these qualities.

Most saintly, probably is that she is a fine cook and competent trainer. 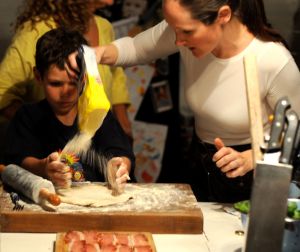 As an early teen she accompanied us on a six months sojourn in Europe, between Moscow, St. Petersburg (then still called Leningrad), Paris and as far as London.

She soaked up so much, inadvertently maybe, that her tertiary study choices were wildly impractical – philosophy, religious studies, political science and the like. What kind of job could she possibly do?

Who would have thought that she would shine the way she has in the Food and Beverage department?

It proves though, that great culinary spirits, are philosophers first and foremost.

A lesser known fact about Thekla is that she started her professional life as an assistant “Galerist”. She said she knew enough about art to truly value it and wanted to bring artists and buyers into meaningful contact with each other. A wonderful goal, perhaps one she will one day re-incorporate into her life’s activities. Apparent though is that she has an inherent eye for beauty, the magic of art and creativity which colours her world and everything she does. 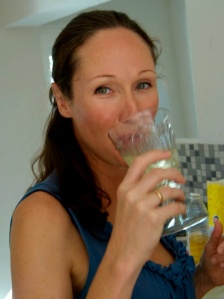 Going out on her own with Domestic  Goddesses is splendid and enriches everyone she encounters.

We are impressed and mighty proud of her achievements, especially now that her Domestic Goddesses blog has been nominated by Eat In – South Africa’s one of a kind searchable food directory – as one of the ten best eat-in food blogs in the country.

All ten nominations run until the end of March 2012 and we would like all who have read and enjoyed Thekla’s food blog to vote for her! To vote, click on the button on the left and you will be taken to the Eat In website’s voting page. There you click on the pink voting bar and following the prompts select “Domestic goddesses” as the blog you want to vote for.

Thanks for your vote and enjoy the following You Tube-video!