Nikki and Bob’s home in Hout Bay where we are staying with Michaelene & Gary for the next while – one aspect of it. It is a home of sumptuous proportions on three levels. This is what you see on entering level two – what would normally be the ground floor which here is substantially raised for the sake of having a good view of the bay – Hout Bay, Afrikaans for “bay of wood” or timber which in the old days of the 17th, 18th and 19th century served to repair ships damaged on their journey to or from the East. The area is still well wooded today.

Such are the days at Christmas time. Grounded. Earthed. At home. See little Ike fly. The little sprog can already swim like a dolphin. Africans are traditionally or culturally shy of water or of swimming. Little Ike is adopted by Nikki and Bob and has been given lesson from early on. And there he goes – throwing himself into it. What a lovely sight.Here he is in a somewhat more sombre mood – in his terrible fours:

Mom and Dad are as strict with him as with their other three. No exceptions because he is of a darker shade. One time Max, his half brother came home from school and said to his mother: Do you know that Ike is brown? Sure I do – and that was all of it.

Up in the attic, on the third level, is our abode for the next ten days or so. It is a wonderfully spacious place which Nikki uses for her rehabilitation classes. Now it is ours and we are enjoying it.
A view from the attic across the space below:

This is our space and it is good and we love it.

Uncle and niece in conversation: James and Michaelene: 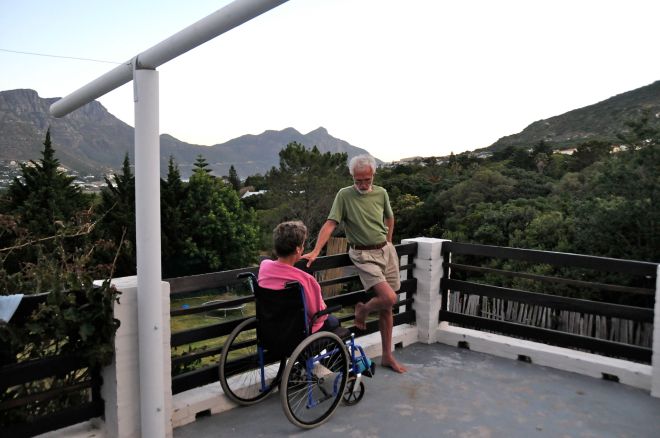 End of another day in Africa. Cheerio for now.